The film has won 15 awards so far, included in prestigious festivals such as the Los Angeles Movie Awards and the New Renaissance Film Festival in London, where it will have its UK Premiere.

In the plot, Wilfred Owen returns to the Somme against the advice of his mentor Siegfried Sassoon, determined to follow his subject 'The Pity of War' to the very end.

Director, Richard Weston said: “Owen said that ‘all a poet can do is warn’ and we hope in some way we have helped that process along. Lines such as 'Dulce Et Decorum Est' and 'Red lips are not so red as the stained stones kissed by the English dead.' will live on to stand the test of time. With our film we intended to depict and illustrate the absolute necessity of artists and progressives to cast light in times of darkness.”

Wilfred Owen himself was a former pupil of Birkenhead Institute High School and two of Sine Wave Media’s producers, Keith Thompson and Neil Perriam were brought up with Owen’s poetry as fellow alumni. When Weston accompanied them on a visit to the battlefields of France, the decision was made that the time was right to tell the story. “The language is so visual. We wanted to remind everyone of these timeless messages through a different medium, honouring their craft and resilience.

Assistant Producer Keith Thompson, who has used the film as a case study for students at Liverpool John Moore’s University’s Business School, said, "We could not have done it without the help of our funders though and we have had some lovely surprises on the crowd-funding journey. Birkenhead Park School raised £397, for example. The least we could do is give something back."

The film is currently doing the rounds at major festivals but will be publicly premiered on November 4th, 100 years after Owen was killed at the Sambre-Oise Canal near Ors only one week before Armistice. 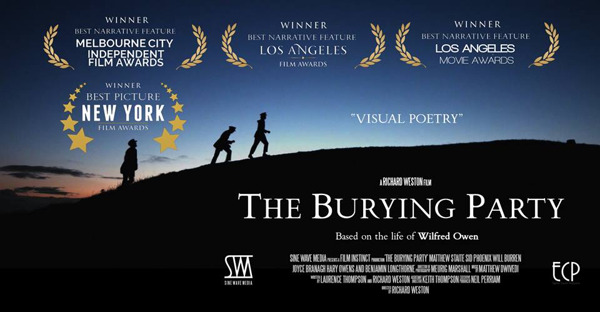